Not Just a Band – It’s Miracle!

Behind the soundproof door of a commercial building in Mongkok was a bright voice singing to the beats of a drum and the strums of a bass guitar. The enthusiasm of the youngsters could not be contained in such a tiny studio, but their joy and satisfaction belies a story of childhood cancer.

In 2017, our Patient Care and Community Service Team approached a group of music enthusiast childhood cancer survivors to form a band. We hoped that through music they could learn to express their feelings, build up their self-confidence, or even develop a musical career.

The youngsters were amazed that a group started off as total strangers could form into a band. After practicing and performing at various CCF’s events for more than two years, the performances became more tacit by the day and their friendship deepened – that’s how the band Miracle came about.

“If you believe in your dream, then you can fly.

High and low, gain or lose, even though you may not be able to dodge.

You are your own legend, with your will, you will achieve something great.

If fate doesn’t fall in your way and you have to go through waves of water, you are still you.”

This inspiring song is one of Miracle’s favourite performing pieces. The lyrics convey their message of encouragement for each and every one who listens to their music. All members have a role in the band: Kiu is the band leader and the bass guitarist; Pansy and Kit are the two guitarists; Jasmine is the drummer; and Winson and Kelvin are the lead singers.

Kiu has a job in the music field. When he learned that CCF was forming a band, he showed support immediately. He thinks that the band will be a meaningful and interesting opportunity for young cancer survivors who all have experience in fighting childhood cancer.

As the band leader, Kiu uses his knowledge of music to strike up conversation among the members to create some sparks in their interactions. Kiu gave me detailed descriptions on how members have changed over the last two years. I can tell that he has high expectations on them. He hopes that someday, the Miracle can perform the best music to the audience.

Pansy remembered that at the beginning the band was incohesive and loose because for many of them, it was only their first time playing musical instrument. As time went by, she felt that the band was gradually taking shape and was glad that their friendships also deepened.

Pansy admitted frankly, “Playing guitar is different from playing other instruments because we are not reading the musical stave. I found it difficult at first. Sometimes, members didn’t show up for rehearsals or performances and I have to cover for them in the last minute, these were the most unforgettable moments for me but nevertheless, I’ve learned a lot through these experiences.”

The members’ first impression of Kit was a shy boy who always wore a mask. But his courage to take part in the band originated from his stay in the hospital ward when he was a child. A child life specialist tried to cheer him up playing a guitar and this had left a lasting impression on him.

When Kit first joined the band, he was still undergoing chemotherapy, but his feebleness did not deter him from his practice. As he grew stronger, he was able to express himself in full force at his practices and members were surprised by his calmness on stage.

He hopes that as their interest in music continues to grow, they could compose songs together and have the chance to encourage and send positive energy to other sick children through their music.

“Drumming helps to relieve my emotions. I find the rhythm and sound very healing!” Jasmine explained why she chose to be the drummer. It took her a while to master the basic rhythm of drumming, but she has learned a lot through the process. It gave her more confidence to keep the band in tempo.

But Jasmine has a secret: “I actually want to be the lead singer! I will try to sing more in the band because I love singing."

Originally the drummer, Winson became the lead singer because he lacked the sense of rhythm. It was this accidental change that made him realised that being a lead singer is not easy at all! “I thought I had a good voice. I’m often commended by friends while singing karaoke. But, it is a different story to sing with a band, apart from having a good voice, I need to in sync with every single member in the band in order to have a near perfect performance.”

“My most unforgettable experience was, after performance, an audience actually came to me and told me that I sang well. I never felt so touched in my whole life. I hope, as a lead singer, I could perform more tacitly with other members and finish every performance with a perfect note!”

Since the programme started two years ago, Siu Ming Sir has been watching the development of each member. Not only did they change individually but he noticed that members were also learning to help one another. Kit was teaching Pansy who did not have much confidence at the beginning how to memorise the guitar score or Kiu would help coordinate the work for each member. That’s how their friendships had developed.

Siu Ming Sir remembered that at first they took four to five sessions to practise three songs and without any stage experience, their performances flopped repeatedly. But after each performance, they would do an after show evaluation and try to learn from their mistakes. He hoped that one day, members of the band could master their instruments skillfully and start composing their own songs. 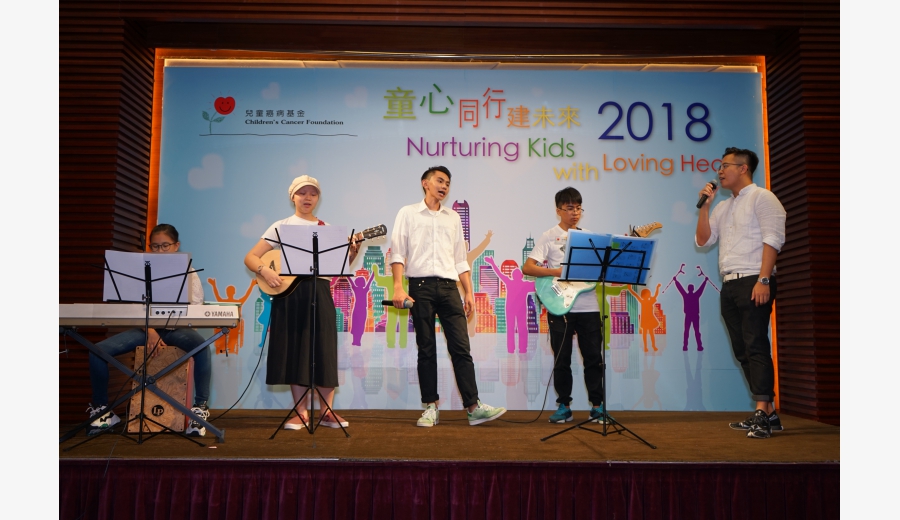